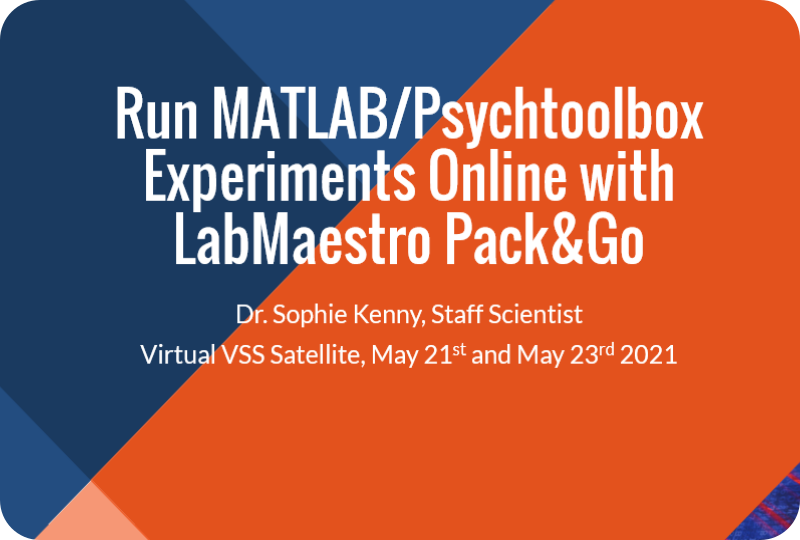 Discover how to run MATLAB/Psychtoolbox Experiments Online: Presentation of the Pack&Go prototype. This talk was presented by Dr. Sophie Kenny on May 21st and May 23rd, 2021, as a satellite event of the Virtual Meeting of the Vision Sciences Society (V-VSS).

Questions can be sent to: scientist_kenny@vpixx.com

Pack&Go is a remote experiment testing and data collection solution under development by VPixx Technologies. Pack&Go runs MATLAB/Psychtoolbox experiments developed by the vision and psychology research communities. In this talk, Dr. Sophie Kenny describes the development roadmap, demonstrates the workflow to run a Psychtoolbox script on the Pack&Go prototype, and presents plans for data security and ethics compliance.

This talk was originally presented at a satellite talk for the 2021 virtual meeting of the Vision Sciences Society, which took place between May 21st and 26th 2021. This talk was presented live over Zoom twice, on May 21st at 16:00 EDT and on May 23rd at 8:00 EDT. The video below is a recorded version of the talk that has been edited and streamlined for clarity. As LabMaestro Pack&Go is under rapid development, the live demo has been removed and replaced by a video recording.

If you would like to receive updates about LabMaestro Pack&Go’s ongoing development and upcoming release, email scientist@vpixx.com.

Publishing an Experiment on the Scientist Portal

Closing an Experiment and Downloading Results

Stay informed about our New Products, Software Updates and much more!